“Armed with a sense of nostalgia. … Takes the open-wound rawness of punk and draws it into dirty, simple rock & roll.”

Somewhere between punk and blues – a porch and an alley – lies Radiator King, the performing/recording name of Boston native and Brooklyn based, Adam Silvestri. Established in 2011, Radiator King’s music shows influences from both Dylan and Strummer with a sound described by Boston blog Allston Pudding as something akin to what “Tom Waits locked in a room for a month with nothing but a copy of Springsteen’s Nebraska” might produce. Whether alone with a guitar or backed by a band, Radiator King embodies the raw energy of punk, the grit and intricacy of delta blues, and the lyrical potency of folk in “songs that are the sonic equivalent to an old whiskey bar at the end of a dirt road.”

At the core of Unborn Ghosts’ evolutionary sound is a breakthrough in Silvestri’s writing process as well as a new sonic approach that seamlessly fuses the disparate styles he once compartmentalized. Following the release of Radiator King’s last full-length, 2017’s A Hollow Triumph After All, Silvestri began experimenting with new sounds and new ways of writing. Instead of working from home, starting with chords and melodies to which he’d later write lyrics, he would spend hours reading, researching and freewriting at the Brooklyn Public Library branch near his place in Bedstuy.

“A cacophony of carnival barkers, lost mariners and post-apocalyptic revelers.” 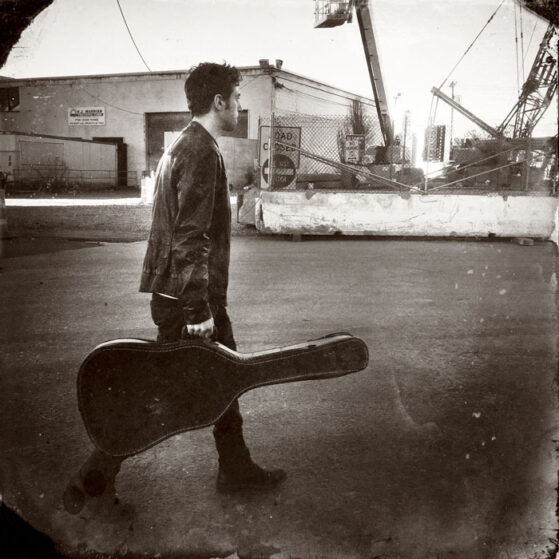 “When you’re on tour, you collect so many recommendations from the people you meet—Moby Dick, Kierkegaard’s Fear & Trembling,” Silvestri says. “As a songwriter, you’re an investigator, and you’re trying to figure out any sort of clue that’s gonna lead you in some new direction. So I would read all these books and just free write—turn off my intellect, get logic out of the way, let my subconscious flow and just see where it went. And then the next day, I’d revisit what I’d written and start to collect lines that stood out. Eventually, I’d notice little threads developing, parts that fit together, and maybe by the end of the week I’d have a new song. I like to think the song is already out there somewhere, you just have to uncover it like an archaeologist. You’re digging and, all of a sudden, there it is. You have to have faith in that process. If you don’t, you’ll never have the patience to stumble on what you’re trying to say.”

Musically, new tracks like “Gamefighter,” “Raylene” and “Haunts Me Now” began to synthesize Radiator King’s varying sounds into a cohesive whole. “I used to have my heavy songs, my ballads and my folk songs,” Silvestri says. “‘Raylene’ was the first one where I started to depart from that and combine different structures and sounds within the same song. It really laid the foundation for the new record.”

Unborn Ghosts (out Aug. 21 on SoundEvolution Music) was recorded in two sets of sessions several months apart with a pair of skilled, distinct producers—Don DiLego and Shaul Eshet—plus an impressive cast of musicians, including drummer Brian Viglione (Dresden Dolls, Violent Femmes), guitarist Derek Cruz (Jesse Malin) and bassist Ed Goldson (Ghostface Killah, Passion Pit). “Every time you make a record, you’re trying to grow and it’s essential to have someone who challenges you,” Silvestri says. “What I’m looking for in a producer is a teacher. Someone who helps you more fully understand what you’re capable of, and who, by the end of the process, not only has a profound impact on the record, but also on who you are as an artist and a person.”

“Channels the spirit of rock & roll.”

The first set of sessions were at The Bunker in Brooklyn with Israeli jazz musician Eshet, who had previously performed and recorded on keys with Radiator King. The songs they cut together were less poppy, leaning more toward an experimental sound, production-wise. “Shaul and I have toured the country together and we know each other very well,” Silvestri says. “He’s an incredible musician, and is really into pushing the boundaries of form and structure, so I knew he’d lead me to new sounds. With Don, he and I were less familiar, and his strength is more as a songwriter—as someone who understands and excels at pop forms. So when we went to his studio, Velvet Elk, in the Poconos for the second round of sessions, it was all about getting the most out of the songs. Don played in Jesse Malin’s band and produced some of his albums. He’s very knowledgeable, I appreciate his tastes, and above all he’s an honest guy. If something’s not up to par, he’ll tell you straight. I learned a lot from him.”

Thematically, Unborn Ghosts and its hardscrabble characters travel many paths. The son of a prizefighter learns that there’s grace in dusting yourself off after being knocked down, and that sometimes the toughest fight is with one’s self. A salty ship’s crew, lost on the sea after an epic odyssey, struggles desperately homeward. Old bluesmen leave the farm—and the church—behind in search of transcendence and immortality. Strangers meet and fall in love, then years later, when the relationship ends, they part and become strangers once again. Childhood friends dream about what they’ll become and cling to each other as life scatters them on the wind. The journey of an immigrant becomes a metaphor for the unmoored life of a touring musician grasping for a sense of home. Death steals an innocent child from this world but can’t extinguish her light.

Above all, though, Radiator King’s Unborn Ghosts grapples with the idea that you can’t run from the past, that you must confront your demons. And that if you do, waiting for you on the other side is a future in which you can tap back into the spirit of youth, with all its curiosity, wonder and blank-slate possibility. “The album title is a bit of a double entendre,” Silvestri says. “On one hand it represents youth, innocence and the magic of what is yet to be, and on the other, these ghosts from your past that continue to haunt you. And I think to be able to fully access that magic, that part of us that can be lost or hidden but that never really dies, you have to free yourself from the ghosts.”